Earlier this year Vault, the worldwide reference for career websites, published its traditional best employers rankings. Consultor took this opportunity to look back at the rankings’ European origins, and to seek to define its broad trends.

For this 2016 vintage, Consultor focused on four consulting firm rankings on Vault. The first two, one for the US and one for Europe, were carried out by the site’s own teams.

Using data collected throughout 2015, they aim to establish a hierarchy of all consulting firms based on six criteria including brand awareness, “overall business outlook” and salaries offered to recruits.

The other two rankings, again one for the US and one for Europe, are drawn from Vault users’ votes. We compiled this data to bring it together in a single table, focusing on consulting firms with a presence on both continents.

As usual, the podium is filled by the McKinsey/Boston Consulting Group/Bain trio, with the exception of BCG on Vault’s European rankings. This is where the surprise is to be found: BCG is ranked 23rd by the site’s teams, far behind the other strategy consultancies. The American publication offers no explanation for this seemingly strange position.

All the more strange, in fact, given that the site’s users continue to rank the company second, both in Europe and in the United States. The other, less surprising, teaching from the 2016 rankings is the difficulty that European firms face in carving out a position in the US market. L.E.K. is the only “native” European to pull off this feat, and actually manages to be better ranked in the US than in Europe (13th and 15th respectively).

Roland Berger, the Old Continent’s other firm to make the US rankings, fails to make the top 25, with the site’s users pushing it even lower, all the way down to 41st place. A potentially disappointing result for a firm that, in Europe, has for a number of years been hot on the heels of the leading trio. Mars&Co, still ranked 22nd in 2012, has vanished from the radar screen, as has OC&C, despite holding the 22nd spot in the US in 2012. This is in stark contrast with Europe, where the firm is doing well and is closing in on the top 5.

As for the rest, the rankings are relatively coherent between the two continents. This is a rather logical tendency, since reputation is known to play a significant part in these rankings. The bigger stables have the means to consistently occupy the frontlines, and this is in fact vital for them – they need to generate as much exposure as possible, whereas smaller, less costly entities can afford a more discreet lifestyle. 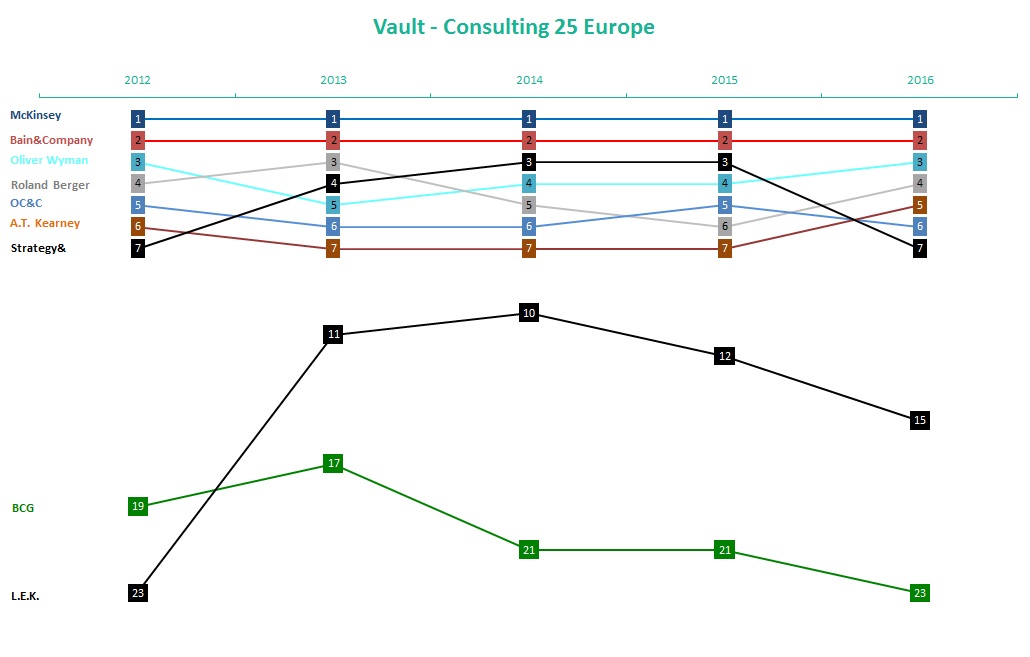 A look to the past reveals a certain stability in the Vault ranking. Most firms have held essentially the same positions for the last five years. BCG, in desperate shape in Vault’s European rankings, seems to continue its descent into the inferno that began four years ago. We at Consultor have no explanation for this, especially since the firm continues to enjoy a remarkable position in some of the continent’s bigger markets, to be third in the US, and to be highly respected by consultants worldwide.

Note also a penalty for being bought out for one of the Big Four. Strategy&, formerly Booz Allen Hamilton, initially did not appear to suffer from its integration to PwC. This year it has evidently been asked to settle the bill.

In Europe the firm slumps from 3rd to 7th place in a single year, and the fall is even more impressive in the US, where it falls a whole ten spots from its 4th place last year – and is even overtaken by European L.E.K., 13th. To a lesser extent the same fate is reserved to Parthenon, purchased by EY. In 2014 the firm was 8th in the US rankings, today it is 15th.

Consultants are even more severe with firms integrated to one of the Big Four: Strategy& dropped from 4th to 18th place in Europe in just two editions. No major surprises are to be noted elsewhere. Fluctuations remain relative and no major upheavals can be found in the users’ grades. 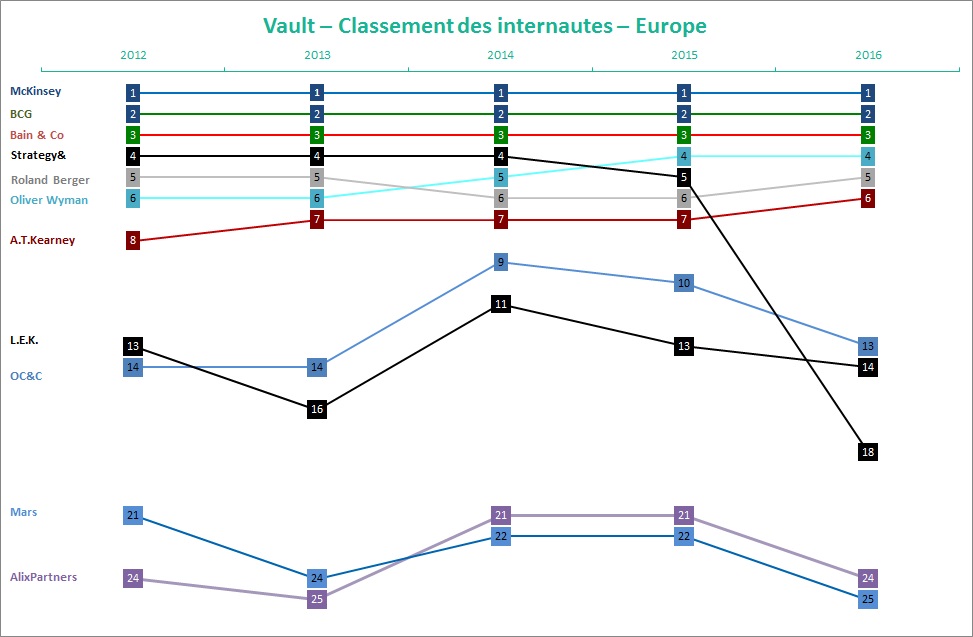